Use Audio Hijack to record any audio source on your Mac. Download the free trial now!

I have half a dozen app subscriptions, usually 99-cents to $1.99 a month and I doubt if I will spend more than that. It adds up. J.R. Bookwalter writes about a subscription app that fits my model.

Filmic Firstlight is an iPhone camera app tailored to shutterbugs who want more control over how images are taken. Although the app offers automatic focus and exposure—one tap on the screen to set, another to lock—most everything else involves manual intervention.

As is the case with many camera apps, manual settings bound.

Focus and exposure can also be independently adjusted with the swipe of a finger: left and right for the former, up and down for the latter.

Now, what about the ongoing price tag?

There’s a lot to love about Filmic Firstlight but forcing a subscription into a camera app makes for strange bedfellows.

I disagree. I’m not an app subscription fan, but priced right and used frequently, the 99-cents per month is cheap.

Startup insurance provider Lemonade is trying to make the best of a sour situation after T-Mobile parent Deutsche Telekom claimed it owns the exclusive rights to the color magenta.

Only in Germany. For now. Lemonade’s founder, Daniel Schreiber:

If some brainiac at Deutsche Telekom had invented the color, their possessiveness would make sense. Absent that, the company’s actions just smack of corporate bully tactics, where legions of lawyers attempt to hog natural resources – in this case a primary color—that rightfully belong to everyone.

I want my own color.

My history in the technology age dates back to the last century, back to a time where computing power was measured in megabits and then gigabits, and a 10-megabyte hard disk drive could be yours for a mere $1,500.

Most personal computers were powered by chips from Intel, Motorola, and a few others of forgetful names, and they were differentiated by clock speed. MegaHertz. Then GigaHertz. The latter is still be used. This week I ran into a benchmark shootout between Intel and competitor AMD.

I was bored. Why? …  END_OF_DOCUMENT_TOKEN_TO_BE_REPLACED  »

For whatever crazy reason, Apple decided to get rid of the much loved MagSafe power adapter on new Mac notebooks. Luke Filipowicz found some but I see a problem with one:

Apple’s latest MacBooks and MacBook Pros don’t have the MagSafe power cable that previous iterations did. That means that if your power cable gets tripped over and pulled, your laptop is probably going with it. If the lack of MagSafe is preventing you from purchasing a new MacBook Pro, or you’re having a hard time adjusting to life without MagSafe.

Don’t get the first one on the list- Upmely. You’ll know why from the image.

Word on the streets says Apple is changing how it develops software because iOS, iPadOS, macOS et al have too many bugs. Maybe so. Maybe not. Only Apple knows for sure.

Sometime in early autumn each year I upgrade all our Apple products; this year two Macs, three iPads, two iPhones, two Apple Watches, one Apple TV. Every household’s numbers may vary a bit, but the process remains the same.

Even without specific bugs this year was a bad year for upgrades. How so? …  END_OF_DOCUMENT_TOKEN_TO_BE_REPLACED  »

The wireless transmitter plugs into those jacks normally reserved for wired headsets and transmits the sound to your wireless headphones. It has a built-in battery that lasts up to 16 hours, after which time it can be recharged via USB-C.

Great for long flights but works on a TV or car, too. All it needs is a standard headphone jack; then just sync up AirPods or wireless Bluetooth earbuds.

Apple Car might not be ready to go, but Volkswagen is moving quickly to put electric vehicles on the road. Jonathan M. Gitlin on a VW concept car ready for prime time.

The ID Space Vizzion is the latest installment in an electrification push from one of the world’s largest automakers, one aiming to sell 20 million electric cars worldwide over the next 10 years.

Ignore the ID Space Vizzion’s Z-overdose name and think of it instead as an electric Passat station wagon. It’s a five-door, more practical evolution of 2018’s ID Vizzion, itself VW’s take on a Passat-sized electric sedan. But this one looks better because as we all know, wagons > sedans. 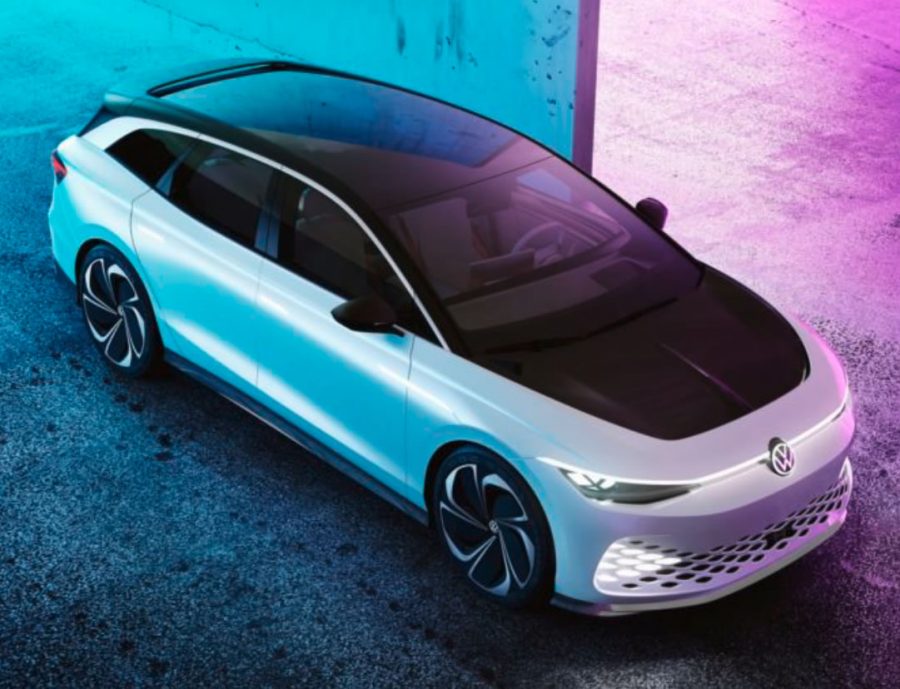 The amount of storage available in a small space for an even smaller amount of money never fails to amaze me. Maren Estrada with details on a new 1TB SanDisk microSD card.

If you want the king of all microSD cards though, pull the trigger right now because the SanDisk 1TB Extreme MicroSDXC UHS-I Memory Card is on sale at its lowest price ever. It retails for $450, which is obviously a tall order. Hurry up and grab one right now on Amazon though, and you’ll only pay $299.99!

That is an online pre-Black Friday deal but points out how things have changed. My first hard disk drive was an external disk with 10MB storage. MB as in Megabytes. $1,500. Times changed.

My Apple life started the week with yet another iOS upgrade. I don’t know which one, but perhaps the 10th since iOS launched back in September. Apple should add Fast and Furious to Apple TV+; the company launches more OS upgrades than politicians launch lies.

Our household has three Macs, four iPads, two iPhones, two Apple Watch, each with an average of about four upgrades each since iPhone 11 was announced. Do the math. 11 devices times four is 44 upgrades.

Get Freedom To Draw

Jeffrey has a few words about the 'Steve Jobs Didn't Build Anything' missive from writers too busy splitting hairs to make a good argument.

Ed's SpinTAXI has thoughts on "Apple's 'Form Over Function' Era Ending" because designer Jony Ive has moved to other pastures.

Dave explains the complicated details behind "How Apple Downgraded The Mac 'Pro'" by calling some machines pro that really are not (and raising a 'Pro' price crazy high).

Indeed. Great video. The tell is the bokeh view. Otherwise, even experts have difficulty telling which photo came from which camera.

The E in Mach-E stands for electric. Darrell Etherington explains:

Ford’s teases of the vehicle so far suggest a crossover-style electric SUV, and Ford has put up some collateral material on the web with a few additional clues about what it will offer, including a targeted EPA range rating of “at least” 300 miles, and a charging rate of around 47 miles in just 10 minutes with a 150kW DC fast charger, with two years of free charging across Ford’s EV charger network included

Will it burn rubber?

Brave is my favorite Mac browser. If everyone used Brave instead of Safari or Chrome, the world would be a better place. Rae Hodge explains:

Brave is elegant, very fast, uses less power, offers more privacy as default, and comes with a way to pay publishers when their ads are blocked.

Andrew Liszewski on the much anticipated and now maligned Photoshop for iPad:

A year ago, Adobe revealed a potential game changer for the iPad that could help turn the tablet into a legitimate laptop replacement: the full version of Photoshop was coming to iPadOS. A year later, the mobile version of the long-revered photo editing app is finally here, and it’s a near unusable disappointment.

Longtime Photoshop tools and features that many artists rely on are completely missing, including the pen tool (which is critical for slicing up layers), RAW import, image filters, advanced masking options, the Curves tool, brush libraries, keyboard shortcuts, and a long list of other features that are inexplicably missing at launch.

Back to the drawing board? What has Adobe been doing for the past nine years?

Times change. Once, back in the day, television consisted of a few blurry and fuzzy channels. Cable TV changed that to many channels that were less blurry. Thanks to satellite feeds, cable TV can be crystal clear; 500 channels and nothing to watch.

The internet has changed the very nature of television and I am about to go with the flow. Instead of hundreds of channels, thanks to YouTube, streaming TV, and more content than we could read or view in a thousand years, TV has become a totally customizable experience.

Two of the most recent entrants to streaming media are Apple’s Apple TV+ and Disney’s Disney+ I’m ready for a change. Which one? …  END_OF_DOCUMENT_TOKEN_TO_BE_REPLACED  »

iSeeCars.com analyzed the prices of over 6.9 million new cars for the study, which also includes pickup trucks, SUVS, and noncategorized cars from the 2014 model year also sold that year. These prices were compared to more than 800,000 used cars from the same model year sold between January to October 2019. The “used” prices were adjusted 7.9% for inflation.

Among so-called sports cars are Mazda’s Miata and Porsche 911. Also on the list- Camaro and Mustang and Dodge Challenger- definitely not sports cars.

As they say, wait’ll next year. Andrew J. Hawkins:

One of the most hotly anticipated electric bicycles scheduled to be released in 2020 isn’t from a traditional bike manufacturer, or even some new crowdfunding e-bike startup, but from one of the oldest motorcycle companies in the world.

A Harley bike. An electric bike.

I would have to drive it to believe it. Richard Lawler:

Like the Porsche Taycan, the Mustang Lithium has an 800-volt battery system that delivers more performance (up to a megawatt of electrical discharge) even as it reduces weight and heat. You can fine-tune the output on a 10.4-inch touchscreen, too, choosing between torque settings that range from a modest “valet” through to “beast.”

Travel can be fun if you can afford it and have the time. I found this from Brittany Chang and it is intriguing.

Ford and Westfalia have teamed up to create Nugget, the first iteration of Ford’s line of Transit vans that have been converted into tiny homes on wheels.

I once owned a Volkswagen Camper, Westfalia class. Loved it. Not sure I wanted to live in it. This is different.

I haven’t found a U.S. price tag, and the unconverted version is MSRP $27,000- but it needs all the proper amenities before consideration.

Nugget is available in two sizes: the standard and the long-wheelbase. The latter offers more amenities, such as a built-in toilet.

No, despite the headlines and hype, 5G is not here yet; and not likely to be fully ubiquitous for a few years. A few manufacturers are pushing their 5G smartphones and more will be released over the next couple of years. What can you expect in a 5G iPhone?

How about thicker, heavier, and more expensive? Or, maybe not. Nobody- except Apple- really knows for sure, so anything you read- especially from analysts who get paid to guess what will happen- is conjecture.

Tom Warren on something Microsoft should have done a long time ago.

The software giant originally unveiled its Edge icon more than four years ago, and it’s fair to say it was a logo that clinged to the past of Internet Explorer. Microsoft’s new logo was discovered as part of a new surfing mini game hidden inside the latest Canary versions of Edge. It looks like a wave, and includes a similar Fluent Design style to the company’s new Office icons.

It probably doesn’t matter so long as you don’t think of Internet Explorer when you see it.

MacX DVD Ripper Pro is the Mac tool to rip DVDs to MP4 or MOV movies in 5 minutes. Office 365 for Mac, iPhone, and iPad (or Android and Windows PCs).

Do NOT follow this link or you will be banned from the site!