Power To The People

From the Anker portable charger for MacBook, iPhone, iPad.

If there’s one thing most computer and mobile device owners can agree upon, it’s email. If ever there was a killer app, it’s email. The app we’d love to kill before email kills us. Email is like the weather (everyone talks about it, no one does anything about it).

Here’s a look at email of the future.

One of my favorite Mac utilities is the Mail add-on called SendLater, a cleverly designed utility that allowed users to send email messages with a scheduler. Alas, SendLater is no more, but now resides as a component of MailButler, which mashes up a number of very useful email add-ons beneficial to anyone wrapped up by the scourge of email. Alas, MailButler is so futuristic it’s a subscription model.

Look at how easy it is to schedule an email to be sent later in MailButler. 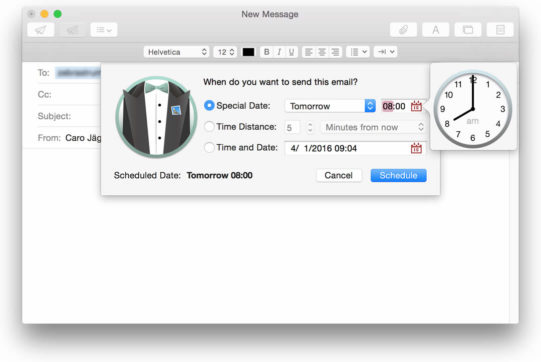 Write now, send later indeed. I can’t say enough positive about SendLater and that favorite functionality is in MailButler, too.

MailButler also tracks email so you know if the recipient has actually read your message. Think of this as an analytical tool so you know who’s paying attention to your messages and who’s not.

Likewise, MailButler has this nifty neato feature called Follow-Up which reminds you which of your email messages that you expect a response have not responded. It even gives you the option to schedule a follow up reminder so you’re notified when the recipient has not responded to your message.

Also built in to MailButler is a Notes function which lets you convert email messages in the Mac’s Mail app into notes (with all the email’s formatting, attachments, reminder information, too). For now, this clever feature is stuck with Evernote, but when it goes to OS X’s built-in Notes, I’m all in. 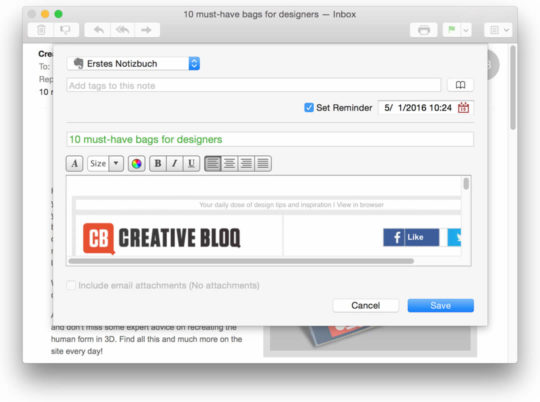 MailButler adds a nice attachment option so your email messages with attachments can save them in the cloud. When an attachment reaches a certain size it gets uploaded automatically for safe keeping. Where? Almost everywhere important. Dropbox, Evernote, Box, Google Drive, Droplr, and more. No Amazon S2, though.

MailButler brings some style and grace and professionalism to Mail’s rather dry signature offerings with templates that add photos and text and color. 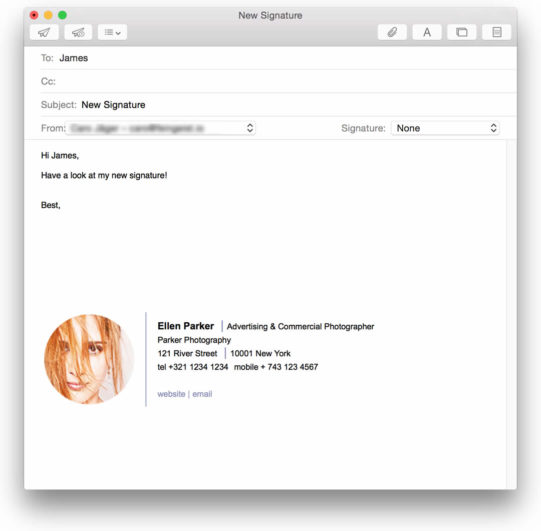 Also built in are a few handy features that everyone could use. There’s an automatic reminder to include an attachment if the email message says attachment but there’s no attachment included. I’ve sent messages that claimed an attachment was included only to have forgotten to send the attachment.

Another favorite function- and you can see where a built-in scheduler comes in handy- is the Undo Send.

Yep. Undo Send. Set up a predefined period of time and any message you send now actually will be sent later. That gives you time for remorse to set in, or to change your mind, or to add something to the message you forgot, but still make the changes before the message gets sent.

See? The future of email is packed into a suite of functionality called MailButler.

The future also brings with it subscription pricing; apps that you pay by the month to use. Adobe does it with Creative Cloud. Microsoft does it with Office 365. MailButler does it, too. One user with 30 uses per month is free, but use it more than that and the price tag is $6.75. A month. $81. A year. Use MailButler for five years and you’ve shelled out $405.

Email has been an evil for years that we feared may last forever, and just when someone comes up with a bundle of useful features we’re required to pay forever.

Give your Mac's Finder new super powers, manage files and folders faster, control it all with Path Finder.

Creative Cloud is a suite of design, graphics, media, and production tools for Mac and Windows.