Few of the Mac’s built-in apps get as much use, scrutiny, and criticism as the venerable Finder. First, the Finder has been around since the early days of the Mac. Second, the Finder didn’t get much love from Apple’s engineering teams until the past few years when it received features already found in Finder replacement apps.

Here’s the deal. Apple’s neglect caused me to stop using Finder years ago. Why? More capability and usability was available elsewhere. Think of the situation where Superman became the Finder and brought his super powers to your Mac file and folder management requirements.

That’s Path Finder. A Finder replacement for earthlings that seems to have originated on Krypton. Just as Superman looks and acts human, Path Finder looks and feels much like the Finder. 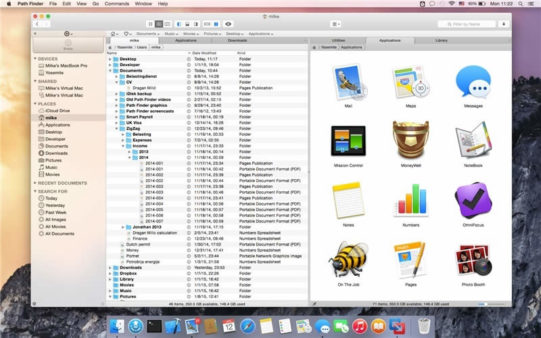 A few of the newer features in OS X’s Finder originated on Path Finder years ago, including tabs and dual panes, but what you get with Path Finder is what you don’t get with Finder, including an option to view hidden files, folder comparison and sync, and full keyboard shortcuts.

Batch file renaming made it to the Finder but gets painfully tedious after just a few renames. Path Finder handles renaming with ease, comes with bookmarks and tab presents to make it easy to navigate to folders. There’s a built-in image editor so you won’t have to open an external editor, but there’s also a built-in text editor (think TextEdit but more convenient), too.

Path Finder’s basic functions are visible on the top toolbar but everything up there is fully customizable, too, so you can setup your own tool workflow. The right-click contextual menu has multiple options that you control, and the keyboard shortcuts are customizable as well.

What you get with Path Finder 2016 is a mature Mac app which never seems to stop moving the bar forward. The latest update has Dropbox integration right into the Finder-like sidebar, FolderSync and FolderMerge to compare and sync or merge a folder’s contents instead of just overwriting what’s inside. That is incredibly handy.

You’ll appreciate the multiple panes and tabs, of course, but those are commonplace these days (thanks to Path Finder’s innovations), but the new version has a way to copy files from one pane to another with just a click. Drag and drop is so 1999.

I’m more of a set-it-and-forget-it geek. I love settings in Preferences, but I prefer to figure out what I like and leave it alone. Path Finder does not disappoint. 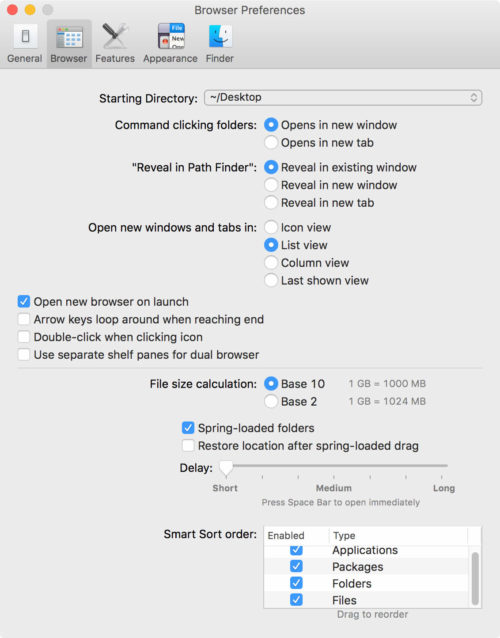 Browser preferences, for example, gives you options on what takes place when you Command-Click a folder, or setup new windows and tabs to be Icon view, List view, or Column view (my favorite).

There’s a built-in option to toggle separate shelf panes for the dual browser. Shelf panes change the dynamic of how you use a Finder-like app.

Mac users don’t get many customization or personalization options but Path Finder has plenty. 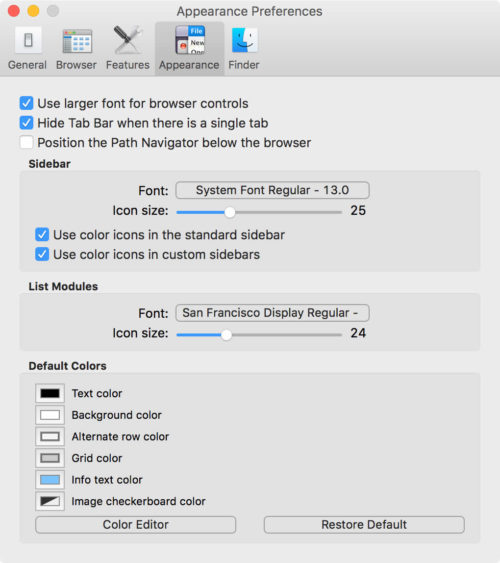 Select the Path Finder font you want to use and change the font size using a simple slider bar. But that’s not all. You can have larger fonts for browsing controls, and even change the font color, grid color, background color, and much more with a few clicks.

Elsewhere, Path Finder gives Mac users additional compression and archive options. You’re not limited to .ZIP but also get .SITX, BZ2, and GZIP. In fact, you can spend plenty of time in the Features section because it has additional options for Network, Keyboard, Editor, Desktop, Labels, various File operations, and the all important Contextual Menu options.

Seriously, it’s as if Superman became the Mac’s Finder and decided to do something about the shortcomings. If there’s a negative, and everyone has a different perspective, Path Finder can be overwhelming to the average Mac user who doesn’t have an issue with Finder. The app looks and feels like Finder but does much more so you’ll need to give consideration to which of the many functions can be rolled into your personal workflow.

Give your Mac's Finder new super powers, manage files and folders faster, control it all with Path Finder. Get full keyboard navigation in a Finder-like app with dual pane view, folder sync, and a long list of tools.

Adobe's Creative Cloud brings together a suite of design and media tools for professionals who demand the best.

HP's printers work on wireless networks and from any Mac, iPhone, or iPad.