The Office everywhere suite for Mac, iPhone, and iPad.

We live in interesting times; an age where the information superhighway has become the mis-information superhighway; a platform accessible to all and usable for everyone to do whatever they choose; good or bad. I have no doubts that political polarization has grown thanks to the interwebs. Conspiracy theories abound these days and are heavy on conjecture and accusations and short on visible evidence. Among examples I read recently was one which accused the government of exaggerating Hurricane Matthew’s strength because climate change.

There are problems with such conspiracy theories. First up, they’re absolutely easy to create so there are plenty, and thanks to email, Twitter, Facebook, et al, they’re easily spread. Second, actual conspiracies have difficulty maintaining secrecy beyond half a dozen to a dozen people. Any conspiracies that involve more people usually have someone spill the beans or leak the secret. The government cannot be accused of being full of incompetent employees who cannot do anything right, but who manage to keep such secrets from the public for decades; like hiding the notion that aliens walk freely among us, and are working to undermine humanity.

During the last presidential debate a fly landed on Hillary Clinton’s blouse, and then on her eyebrow above her left eye. 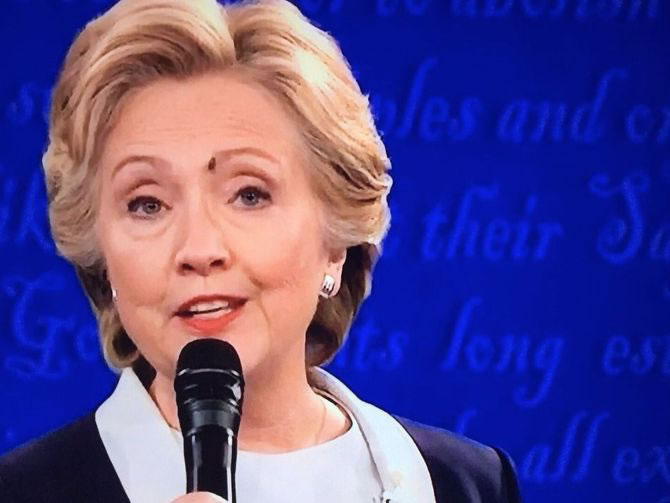 Is that a fly? Or, is that Apple’s new mini-Drone delivering a message to Clinton during the debate?

Everyone knows that Apple leans left and certainly has the technology chops to help political candidates that could help Apple when elected. Does anyone doubt that Apple CEO Tim Cook is not a Trump kinda guy?

So, what message did Apple’s mini-Drone deliver to Hillary Clinton during the debate? And why use a drone instead of hiding a speaker and receiver in Secretary Clinton’s ear and use a radio instead to deliver debate topics, answers, and counter-punches?

It’s likely the Debate Commission has available to it and used the proper technology to detect any radio frequencies that candidates could use in the debate hall, so we can rule that one out. What the Commission and Washington University officials did not count on was an Apple mini-Drone’s ability to deliver a message to Hillary Clinton while she was on stage and while she was talking.

Sure, some commentators and observers noticed the fly, but did they fully understand what a mini-Drone could do to help out a candidate on stage, during a debate? Of course not. See? It’s another conspiracy between the Clinton camp, the Democratic National Committee, and Apple Inc. to advance their left wing agenda on the wings of mini-Drone technology right in full view of 80-million people who assumed it was a just a fly.

What message did that fly deliver to Clinton? And how was the message delivered? Little speakers? A small video projection onto her contact lenses? Did the mini-Drone use a speaker than could only be heard by Clinton? Did the message provide real time debate tips and pointers that Clinton could use against Trump?

Or, was the mini-Drone manufactured by Trump’s friends in Russia to deliver a toxin to Clinton so she would fall ill on the campaign trail? Have they done this before? That could be considered likely given Clinton’s many physical missteps, resting periods, and illnesses during the campaign?

That’s what’s so great about the interwebs. Anything is plausible no matter how far fetched it is. Oh, and people will believe anything.

The Man Who Cried ‘Wolf’

Adobe's collection of Creative Cloud apps brings together Photoshop and Illustrator for design, Premiere Pro and After Effects for video production, plus many other design and media tools for professionals who demand the best, always updated, integrated.

Creative Cloud is this week's sponsor, so check out options for individuals, business teams, students and teachers, schools and universities.

iShowU Instant captures the Mac's screen and quickly turns it into an HD movie to share or upload.