As is the case with most Mac users, and definitely the vast majority of iPhone and iPad users, Safari is my main browser. Or, rather, was my browser of choice. I just made a switch. This move didn’t come easy. I’ve tried many browsers, and use Google’s Chrome more than any other browser other than Safari; including Firefox, Brave, Vivaldi, and others.

I just switched to a new version of Opera.

I know what you’re thinking. “Opera is still around?” Yeah. It may not be used by more than a few percent of the browser users on planet earth, but out of more than three billion users, you’d be in good company with a few hundred million Opera users.

Opera claims this latest version is the Opera browser “reborn.” Uh, no. Most browsers these days are the same. They display webpages the same way, they’re all fast, most of extensions or add-ons, and most are free.

What makes this new Opera any different? No much.

It displays web pages accurately (as I can tell). It’s fast. It has a few clever add-ons. It’s free. What’s different is the continuation of Opera’s direction. A couple of years ago Opera added a free VPN and a built-in ad blocker. The latest version has an unobtrusive lefthand sidebar that incorporates a few of the more popular- and secure- social messenger apps. Facebook Messengers, WhatsApp, and Telegram, specifically. All available with a click. 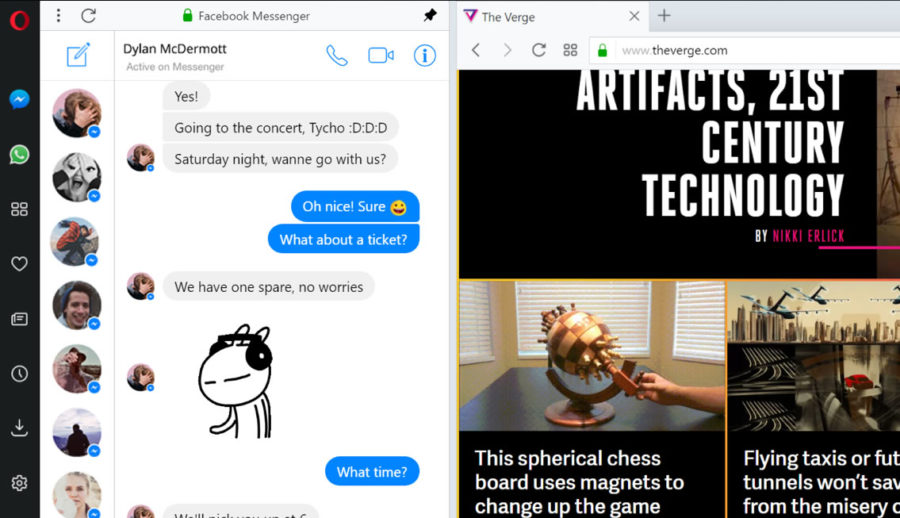 As is often the case with Apple’s applications and products, there isn’t a single feature that seals the deal; it’s the collective, the user experience, how the whole widget works well together. That’s something of the experience in this new Opera browser. Here’s what I like.

VPN - I don’t use VPNs all the time but when I travel or go mobile, it’s a must. This is built-in and free.

Ad Blockers - Advertising can be annoying and the various trackers and analytics scripts slow down webpage load times and increase bandwidth usage. The ad blocker is built into Opera and is easy to allow exceptions.

Speed - Try it. It’s fast without the ad blocker and much faster when the ad blocker is turned on. Impressive enough to be a notable change to the Mac browser experience.

Memory & Battery - Google’s Chrome is known to be a battery hog. All those spawned Chrome helpers don’t help your Mac’s battery life. Opera spawns them, too, but they use far less CPU, and less battery than Chrome or Safari, which seems odd since Opera’s reborn browser is based upon Chromium.

User Interface - One reason I can’t use Firefox for more than an hour at a time is the user interface clutter. Chrome comes across as spartan. Safari is friendly but becoming more cluttered. Opera is in between; similar to Chrome, for obvious reasons, but clean and uncluttered, even with the sidebar.

Opera asks to save passwords entered manually so they can be re-entered during another visit. Apple’s macOS Sierra Sharing Pane is built in, too. The ad blocker can have blocked lists, and insecure forms or logins are identified.

All in all, this new version of Opera is enough to get me to switch on the Mac. For awhile. Most browser tests last for an hour, a few for half the day, but this one surprised me with how fast and elegant it works. Try it for the speed and ad blocker alone. I would like to see the sidebar expanded beyond settings, bookmarks, secure messenger accounts, but this is a good start.

‘You’re A Menace To Society!’

The Best ‘Couch Computer’ Ever

Adobe's collection of Creative Cloud apps brings together Photoshop and Illustrator for design, Premiere Pro and After Effects for video production, plus many other design and media tools for professionals who demand the best, always updated, well integrated.

Creative Cloud is this week's sponsor, so check out options for individuals, business teams, students and teachers, schools and universities.

Mac, iPhone, iPad, and Watch, PCalc, is the premier calculator for scientists, engineers, students, and programmers (editable conversions, too).